The new Volkswagen Taigo is built on the MQB platform which follows in the footsteps of the Polo hatchback and the T-Cross SUV models.

The design of the new coupé is characterised by strong proportions. Starting with the stylish LED light strip which continues over the entire front to the Volkswagen badge and finishes by connecting to the IQ.LIGHT LED matrix headlights. 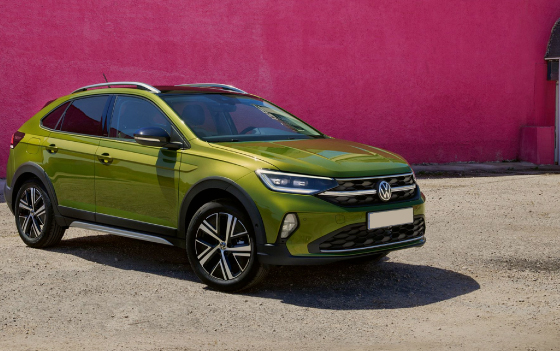 The new SUV coupé is filled with the latest generation assistance systems which guarantee optimum comfort and high level safety for all passengers.

All trims feature the latest generation of infotainment systems (MIB3). The Digital Cockpit allows you to keep track of all of the essentials on the road such as mileage recorder and speedometer, all on a high resolution colour display.

If your smartphone is running out of charge when you’re out the road, the wireless charging comes to the rescue. Also, if your smartphone is compatible, App-Connect Wireless makes it safer for you to use your apps whilst on the road. It simply mirrors your music, photos and contacts on to the infotainment system and can also be used to show navigation.

The new Volkswagen Taigo is now available to order from Pulman Volkswagen in Durham and Sunderland. Contact our Volkswagen Specialists today if you have any questions regarding the new SUV from Volkswagen.

To be one of the first in line to order a new Taigo from Pulman Volkswagen, sign-up to our newsletter today. Keep a look out on our social media pages for when ordering opens for the new SUV Coupé. Facebook, Twitter, Instagram, LinkedIn and YouTube

Subscribe and stay up to date with the latest Pulman news and offers.

4.9/5
Based on independent feedback
from 231 verified reviews.

We use cookies to optimise site functionality and give you the best possible experience.

This site uses cookies to store information on your computer.

Some of these cookies are essential, while others help us to improve your experience by providing insights into how the site is being used. You can read more about what cookies are and what types of cookies we store in our Cookie Policy.

We use marketing cookies to help us improve the relevancy of advertising campaigns you receive.